KT Tunstall – Fringe by the Sea

Plus support from Swim School

This is a standing event.

Singer-Songwriter KT Tunstall emerged with her 2004 classic debut “Eye To The Telescope” spawning such international hits as “Black Horse and the Cherry Tree” and “Suddenly I See”, which won the Ivor Novello Award for Best Song in 2006. That same year KT won her BRIT Award for Best British Female Artist, and earned Grammy and Mercury Prize nominations in 2007. KT has released six albums internationally to date: Eye to the Telescope (2004), Drastic Fantastic (2007), Tiger Suit (2010), Invisible Empire // Crescent Moon (2013), KIN (2016) and WAX (2018), cementing her reputation as a major recording talent, as well as a mesmerising live artist.

Support comes from Edinburgh-based Swim School, a four piece modern progressive pop band who’re widely touted as ‘ones to watch’ in 2020. With triumphant performances at TRNSMT, King Tuts Wah Wah Hut, Belladrum festival and all across Scotland in 2019, the year ended with the band supporting The Xcerts on their UK tour.  Their latest single ‘How It Should Be’ is out now. 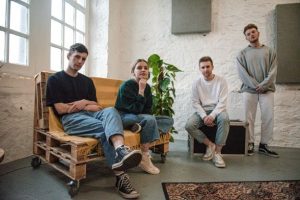